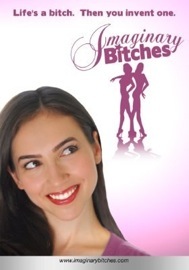 Choosing to remain single in a coupled world is sometimes a lonely gig, never more so than when all of your close friends are smugly cocooned in their couple-bubbles. It can make you feel like the last single person on Earth.

As once-single friends morph into couples, it often becomes irritatingly apparent that they no longer understand the challenges or  perspectives of singledom. You sometimes feel like hitting them over the head, yet you still love them and yearn for common ground to maintain your friendships. This painful conflict is played out to hilarious effect in the engaging Web series Imaginary Bitches.

Eden is the last single girl in her circle of friends, refusing to compromise her standards simply to have a boyfriend. After an amazing date with a guy she really likes, Eden calls each of her friends to share her exciting news, but they’re only interested in talking about their relationships. Increasingly dispirited with each aborted call, Eden discovers, to her astonishment, that she has conjured an imaginary friend named Catherine—a friend who’s avidly interested in discussing all the details of Eden’s date.

But Catherine proves to be less a “friend” than a total bitch, with something nasty to say about Eden and all of her real girlfriends. That’s right, Eden herself is not exempt from Catherine’s bitchiness. Furthermore, Catherine is soon joined by a second imaginary bitch named Heather. The imaginary bitches quickly establish their presence in all of Eden’s relationships, leaving her to deal with the fallout even as they help her sort out her friendships and her love life.

It’s Sex and the City meets Ally McBeal—except that Eden (played by Emmy award-winner Eden Riegel of All My Children and Year One) is the only one who can see the imaginary bitches. Eden delivers all of the bitches’ lines, parrying her real girlfriends’ careless cruelties with a brutal honesty offset by a disarming sweetness and genuine dismay. It’s the best of both worlds: total honesty without consequences.

When Eden’s real girlfriend, Brooke, hangs out with Eden and the imaginary bitches, Brooke asks what the bitches are saying about her. Eden replies, “Catherine is saying that you’re a fat, selfish bitch who likes me being single because it makes you feel superior . . . But Heather thinks you’re pretty. Sexy, in fact. And that if [your boyfriend] is amazing enough to abandon your best friend for, then she’d like to take him for a spin. Like, have sex with him.”

Through all the casual and deliberate indignities that Eden suffers—from being excluded from couples dinner parties, to going on blind dates, to trying to cultivate new single friends—Imaginary Bitches is a fun, catty look at being single in a coupled world. Season One is available on DVD, as well as on the show’s website and on YouTube. You can watch all 13 episodes in less than 90 minutes.

The following episode (“A Spiritual Bitch-Bath”) shows the tart and tangy flavor of the series. The imaginary bitches take it upon themselves to deal with the “pseudo-spiritual psychopath” who stole Eden’s previous boyfriend. Which makes us wonder: Are the bitches really imaginary? Or simply invisible to the non-psychotic?

My own imaginary bitches are telling me to shut up and watch the episode! 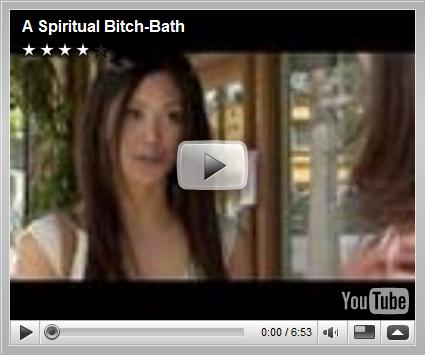 Bitch back in the comments.

I'm an occasional contributor to Zeitgeist: Quirkyalone Pop Culture. Zeitgeist explores how pop culture reflects us back to ourselves—in ways funny, interesting, frivolous and profound. I’m a committed quirkyalone and a pop culture addict who should probably be committed. Pop culture is my hometown, the street where I live, the air that I breathe. It’s where new ideas, fascinating people, trends, and innovation, meet the movies I love (new and classic), the TV I watch (from 30 Rock to Weeds), the Internet I haunt (from Perez Hilton to Salon), and the pile of magazines I read regularly (from The Atlantic to Wired to New York magazine). Professionally, I'm a storyteller, media maven and entrepreneur—the owner of WanderNot, Inc., a Bay Area creative communications company. I also write personal essays, feature articles and profiles, as well as the weekly blog Writer Vixen Explains It All. Quirkyalone Status: Currently happily single and happily open to quirkytogetherness.