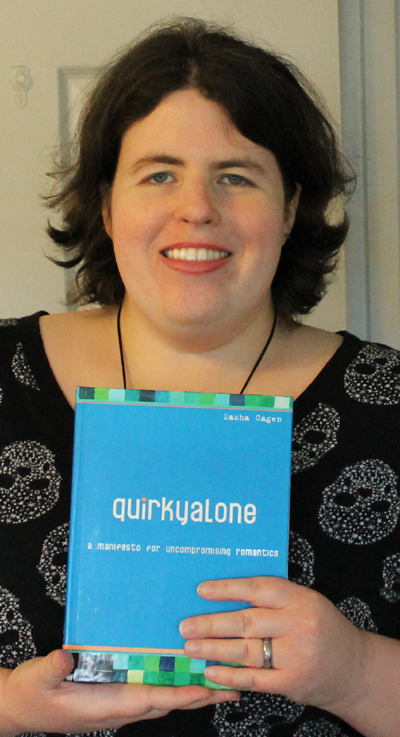 For me, quirky started from day one outside of the womb, but actually knowing the word “quirkyalone” came around when I was in college. I was spending more time on my own, which I found so very, very awesome. I could spend entire days in my apartment with a book, listening to my own music without headphones, watching movies without anyone commenting on what they were about. I could go on day trips around the city, wander through shops at my own pace, without a single second wasted on worrying about what someone else thought.

But in the midst of this contentment there were strange questions bubbling up in my brain, unbidden. Wasn’t I supposed to be with someone? Or wasn’t I supposed to want that? I remember distinctly walking into the university bookstore and finding this cute, blue, hardback book with drawings and quotes. The pages reminded me of zines I had found and admired, and in those pages, I found a tangible peace, because I knew that there was a word for the kind of person I was.

Fast-forward into the future five years. I looked through my books and found that little tome of respite, and I considered giving it away. I was married, a ring on my finger and a heaviness in my heart. I was fairly certain that part of my life was over, because I saw all the faces on the pages talking about solitude and self and I was seized with a choking fakeness. I felt like I couldn’t be that me anymore…had I settled? Had I ruined it all by saying ‘I do’?

In Summer 2013, at the crest of the anxiety wave I had been experiencing, I got an email through the Quirkyalone Mailing List and an invitation to a Quirkytogether 101 class. Quirkytogether, the sibling concept of the quirkyalone movement wherein a quirkyalone could enter into a new stage of life with a partner. I was a little nervous at first as everyone introduced themselves; most were there to tackle what was keeping them from pursuing relationships. I was the odd entity – someone who was there because I was concerned about the feeling that I was trapped inside my own marriage. But as I joined in and took an active part in establishing trust with the whole, beautiful collective of the class, I found myself giving as well as receiving. I realized that I still belonged her, that I hadn’t left a part of myself behind. I had simply evolved.

A snake doesn’t mourn its shed skin, nor is a butterfly nostalgic for the caterpillar it used to be. As I interacted with the Quirkyalone community, I saw that many of the things I was worried I would lose out on were still there – travel, independence, my own interests – but now they were enhanced by the presence of another. And understanding that I was a better version of my true self saved my sanity and my marriage.

I recognized that for me, quirkyalone doesn’t stop at quirkytogether – it just gets different! And that’s why I feel like I am so fortunate to get to pay that forward, telling people from firsthand experience that you are still you, no matter who is or is not standing by your side. When you are single for a long time, and you give that up to bring someone new into your life, you may find yourself in what feels like a mourning period for that past self. You question if you’ve made the right decision. You doubt. And I can say confidently, now that I’m past that period, it’s the exact same as any other transition in life. New, awesome things are often risky. If we stay comfortable and stagnant, how will we experience the bigger world?

During my first year being married, after the initial honeymoon stage, I started to feel like I was stagnating. Every day started blurring together. The normalcy, which should have been comforting, was unnerving. I was mentally and physically a wreck. I had a hard time sleeping. I felt like I was living my life rappelling with a frayed cord down a cliff-face. The anxiety and fear that I was ruining not only my own life but my husband’s was a constantly clear and present stress. But after taking the Quirkytogether 101 class, and the self-actualization became the soundtrack to living in all its quirky wonder…I smiled more. I offered more acts of kindness to my husband (and to myself too). I was more forgiving. I wasn’t the only one who got stronger. Our marriage had grown muscle, and we knew we were okay.   And here are five ways that I have become a more accepting, loving person – to both of us – since I owned my quirkytogetherness:

Early in our marriage, I found myself feeling like I owed the world an explanation for the little idiosyncrasies of my marriage. It wasn’t that I felt ashamed, but I felt like I at least had to have a prepared speech on why we didn’t have the same last name. I had to have a memorized presentation on why we didn’t have a joint bank account or why we didn’t want to have children. Looking back on it, because of my own personal pressure I was exerting on myself, I felt like I had to defend myself. Now that I have my sense of awareness about who we are, I find myself more capable about owning those things with a certain pride. We are happy, and that’s all that seems to matter now.

The Importance of “Me Time”

“How can I make this something my husband will enjoy?” Before I took ownership of my solitude, I was constantly trying to find a way to force my partner into my hobbies. And while it’s great to have things to share with your other half, I found myself becoming discouraged and feeling like there was something “wrong” with us because we weren’t sharing the same interests. And not only that, but I felt guilty when I left to enjoy my own hobbies. What a waste of energy! Now, I possess fully my own interests, hobbies and decisions, guilt-free: recognizing the uniqueness of being quirkytogether allowed me the self awareness to realize that my husband and I are two fully-formed individuals. We don’t have to do everything together. I know that at the end of the day, he’ll be waiting for me, accepting me in whatever role I take on. And I know he feels the same.

I Am Not an Archetype

The first year of marriage was a lot like the first year of owning a home – it was always the first major topic of any conversation. Anytime I would talk to someone, the question was always, “Yeah, how’s that working for you? How do you feel being a wife now?” Like that was all I was. And that line of thinking led to my own subconscious constantly nudging, as if to say, “Better get used to it. This is me now. This is my world. This is it.” I was so wrong! I am not any one “it.” I am a wife, but I am also an adventurer. An artist. A writer. And my journeys have not ended because of one additional title I possess. I feel free to change, anytime, in any way. Once you step outside the gate and realize there is no pen confining you, you can really begin to explore your own personal potential.

Honesty and Clarity: a Winning Combination

Before I rediscovered my ‘quirky’ self, I felt like I was damaged goods. If I couldn’t make sense of my feelings in a way I could discuss with the person who was supposed to be here until “death do us part,” how could I be real with anyone else? I found myself being antisocial, concerned that I would seem disingenuous, fake or boring. It was only after my personal reformation that I became more forthright and honest with the people around me. As I became stronger and more aware of who I was, I knew immediately that I could be open with my husband. We had meaningful conversations about my decision to not have children, my mental health, and future financial struggles that I realized I had been avoiding. That new level of confidence spread to my other interactions with the world. No lies, no subterfuge.

I am so, so happy: seriously. I feel more present now than I ever have before, because I’m not just waking up next to my husband. I’m waking up next to the real me as well. My joy at being able to accept myself gives me an agency and independence that was born from my quirkyalone spirit. I can go out and spend time with my husband and then still be able to revel in my own space and energy. I still take those trips to the bookstore to wander, and I still lose myself in projects on given days. Because I can still delight in being quirkyalone, my joy becomes contagious, and it becomes a great circle of happiness between us.

Editor’s note from Sasha: The Quirkytogether 101 class that Katie writes about was indeed wonderful. Currently I’m teaching these lessons through one-on-one coaching only; if you’re interested in busting out to develop and manifest your quirkytogether with my support, send a message here and we’ll set up an intro session.

Katie is a writer living in Pittsburgh, PA. Her work has been featured in the Pittsburgh City Paper, Gadchick, Every Day Fiction, Airplane Reading and Moon Magazine. She also frequently muses on her blog, bohemianonrye.com. She has two books available online: "Cape and Dagger" (YA urban fantasy) and "Pickled Miracles" (poetry collection). When she’s not putting words together in a fancy way, you can find her making visual art, playing with gadgets, cooking, reading and adventuring. There's nothing she won't try at least once.