Do quirkyalones get lonely? Of course. We all get lonely. Loneliness is hard to define because it is fundamentally about absence. It’s the feeling that something is missing, even if you can’t specify what: a romantic partner, a friend, a sense of confidence or place, a feeling of purpose. Loneliness is when you want the phone to ring, and it doesn’t. Your friends are not around, and even telemarketers do not love you. Loneliness is a fact of life, even though we don’t want to admit it. A Shape magazine article reports that in anonymous polls, people will own up to being lonely, but when asked to give their names, they change their answer to “self-sufficient.”

Like everyone else, quirkyalones alternate between states of loneliness and solitude. One day we might be stirring spaghetti sauce for a solo supper, listening to public radio, and feeling that there could be no better companion. The next night we might be doing the very same thing, but this time we feel a powerful aching need for someone else to be there. If loneliness is about lack, solitude is the opposite, a feeling of being whole, sometimes deliriously so. Solitude is taking pride in knowing that you are able to amuse yourself, take care of yourself. Solitude can be the delirious feeling of painting, writing, or organizing files for hours on end, being deliciously lost in your own thoughts. Sitting alone in a messy living room surrounded by dirty teacups and emptied-out ice cream containers feels very lonely, while doing something good for yourself, even something as simple as putting new shoelaces in your shoes or paying your bills on time (if you ordinarily have trouble with that) or cleaning your house can feel fantastic.

There’s something key about this distinction—choosing to take care of yourself, to enjoy yourself alone—almost as if when we are lonely we are vanquished, when we feel solitude, we are victorious. This is not just a matter of turning a frown upside down, or making lemons out of lemonade, or making do with being single as a next-best-alternative to being in a relationship, because as we all know, you can be lonely in a relationship too.

At some point in our lives, we will all confront the reality that we are ultimately alone. Perhaps part of the “quirky” in quirkyalone involves engaging in a dialogue with this aloneness. Lindsey, 29, says, “For me one of the important things to experience in being single for a long time is that you are afraid, and you are forced to give up the illusion, not by choice, but because you have to. It’s that whole idea that we are all these individual people, and this is part of what being human is. The human dilemma is really real for you. One of the reasons we crave partnership so much is it’s the spiritual quest. Because part of the human condition is to be separate, we are all looking for connection. Religious people might find their relationship with God, and in the material world, we are looking for that salvation in our romantic relationships. It’s never going to be all that.”

Engaging with our aloneness does not mean hiding in a cabin in Montana: it means careful self-reflection, and it can actually put us in a stronger position to interact with other human beings. In Letters to a Young Poet, quirkyalone patron saint Rainer Maria Rilke nails why: “. . . it becomes always clearer that this is at bottom not something that one can take or leave. We are solitary. We may delude ourselves and act as though this were not so. . . But how much better it is to realize that we are so, yes, even to begin by assuming it. . . only someone who is ready for everything, who excludes nothing, not even the most enigmatical, will live the relation to another as something alive and draw exhaustively from himself as something alive and will draw exhaustively from his own existence.”

Confronting essential aloneness is something that we quirkyalones have to learn through life experience like everyone else, but being comfortable doing things alone is second nature to most of us. Sometimes, spending time alone is just fun—and absolutely necessary for sanity’s sake. Solitude is the kind of thing you don’t even appreciate until it’s gone—when you go home for the holidays or find yourself in a new, intense relationship, you realize that you need a certain amount of time alone, or you start to twitch. Being alone is the only way to be creative in many disciplines. It’s when we are alone that we are able to allow our thoughts to take shape. You don’t need to go on a Buddhist retreat to be in touch with your “true self,” to find the center. This form of solitude often happens naturally, while we are walking around the city, drinking coffee, even while hiding out in the bathroom at work—just a bit of time alone, time for a mini-internal dialogue, allowing our thoughts to lead us where they will.

This is why walking alone is such a vital time for us: it’s a convenient, incidental solitude. And the woman-walking-alone is such a cliché image of romantic aloneness in pop culture: in the opening scenes of Felicity, in Ally McBeal, in advertisements, and even at the end of Shakespeare in Love. We rely on stretches of walking-alone solitude—during which we think, regard buildings and the pastel sky, let thoughts bubble up inside of us—as a natural part of our days. It’s a time for contemplation. The uncompromising honesty of the quirkyalone, her unwillingness to sell out or settle, comes from an almost compulsive conversation with the self. Should I stay in this job? Should I be trying to write a novel? Should I break up with him? Should I stick it out? Some people might say that examining one’s life in such detail is neurotic, but for us, it’s part of mental health, part of living a life of integrity—actions that are consistent with our beliefs and our selves.

Not every Friday night alone can be transcendent. Nor will every trip alone yield earth-shattering insight. There are definitely lonely times, too, when aloneness feels like gaping maw, and you just wish that someone, anyone would call you on the phone. But every quirkyalone knows that a spending a weekend night alone is not necessarily pathetic—there can be odd joys dancing alone in your bedroom or singing in the shower, hard to explain, but true. I like to think of these moments as “glowful” because it helps me to picture a candle in a window, something almost divine about drawing resources from yourself. Mary Wollstonecraft also said it well in 1792 in her Vindication of the Rights of Women: “Solitude and reflection are necessary to give to wishes the forces of passions, and to enable the imagination to enlarge the object, and make it the most desirable.”

Quirkyalone=Flaneur, not Loner
One common misconception about quirkyalones is that they are basically loners, the kind of people who categorically don’t like to socialize. In fact, we are usually a complicated mix of social and introspective. Often the alone states that we seek are the ones that put us in places of possibility: walking alone, sitting in a café, or traveling on a train, we thrive on a mix of solitude and adventure: New people, we love to meet new people (that we like!).

A term more precise for us than loner is flaneur. In The Flaneur, A Stroll through the Paradoxes of Paris, Edmund Wilson defines a flaneur as “that aimless stroller who loses himself in the crowd, who has no destination and goes wherever caprice or curiousity directs his or her steps.” The flaneur is a wanderer and observer who ambles through a city without apparent purpose but is secretly in search of adventure. In the 19th century, the consummate Parisian flaneur was the poet Baudelaire. He described flaneurs as people whose “independent, passionate, impartial minds. . . language can only awkwardly define.”

Baudelaire also wrote, “The crowd is his domain, as the air is that of the bird or the sea of the fish. His passion and creed is to wed the crowd. For the perfect flaneur, for the passionate observer, it’s an immense pleasure to take up residence in multiplicity, in whatever is seething, moving, evanescent and infinite: you’re not at home, but you feel at home everywhere. . .”

How do most quirkyalones discover the flaneur in them? It often happens during travel, exploring a new part of a city, crashing parties, or going out alone. John, 42, writes, “I believe pretty strongly that you meet more people when you are alone. If you are traveling as a couple you are walled off from those travel miracles.” Another woman shares how adventures can happen close to home: “Going out alone is the best. Single people get pulled into the best adventures. No one wants to approach couples to start a conversation/ruckus. I can’t even tell you how many insane things I’ve gotten involved with because I go out by myself.”

We quirkyalones are lovers, but we are also flaneurs. Unless one person is really right, we prefer to wed the crowd.

Continued in Quirkyalone: A Manifesto for Uncompromising Romantics by Sasha Cagen 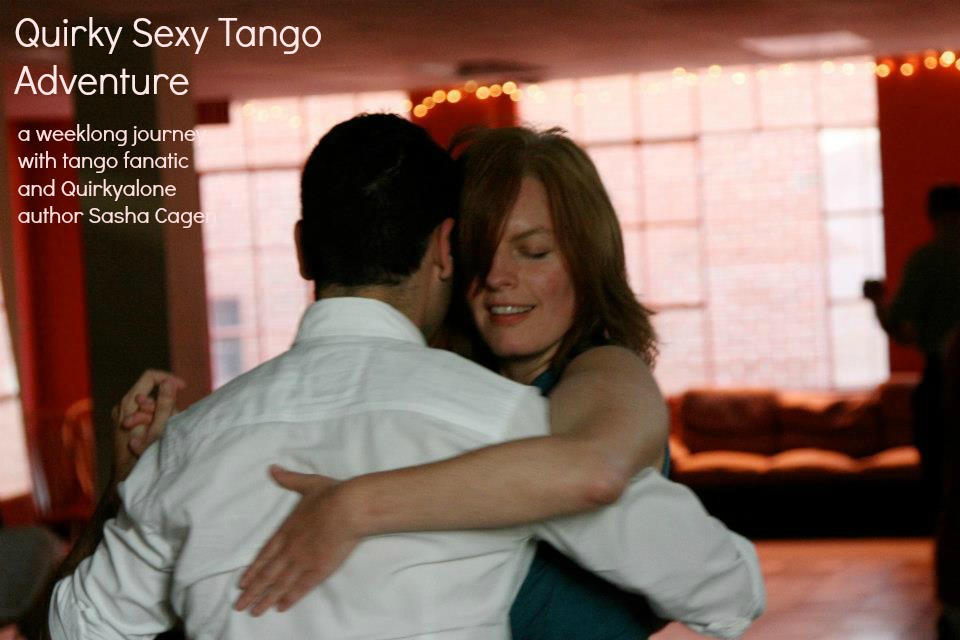 Join us and have your first tangasm in Buenos Aires. . . this February or March!